Over the last few years, there have been some rumors and fake news reports that have suggested that the Philip Morris company is going to be coming out with a Marlboro cannabis product for sale in states that have legalized its sale.

This was first produced as a joke by a satire website but was taken seriously. Many people who wanted to be able to buy high-quality legalized marijuana was very hopeful that the story was true.

People then discovered that it was fake news but another satire site later decided to run a similar report. This time it was better known to be a joke rather than a real story, but some people still took it as real.

The exciting thing is that sometime after, the vice president of Philip Morris stated that the company was looking at offering Marlboro joints at some point in the future.

Colorado is an example of a state that has legalized the sale of cannabis, and it is expected to do a billion dollars a year in sales. There’s no question with that level of sales opportunity that the tobacco companies are certainly going to want to get in on that market. Already companies like Coca-Cola have gotten involved in that Marketplace. 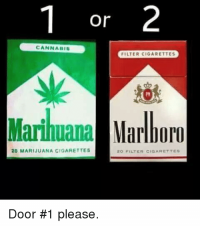 It’s going to take some time for the states to legalize the sale of this product but these companies are putting themselves in a position so that once it’s authorized in enough States, then they’re going to get involved in that market.

Because throughout the US there are a lot of people that have long-awaited the day when this product would be legalized, they are greatly anticipating companies like Philip Morris to start selling a quality product.

Those who have already smoked recreational or medicinal marijuana would like to be able to get quality weed that is entirely legal. It has long frustrated those that believe that weed is not much different than alcohol but illegal.

With the changing of the law, it will likely mean that those unwilling to buy this product illegally may choose to do so once the law allows it.

Since the state of Colorado has legalized the sale of pot, there has been a great boom in companies that have sprung up offering it for sale. Even though there is a multitude of small companies that are selling this product, there hasn’t been any company that has dominated the marketplace.

It is highly likely that if a company like Philip Morris got involved that it would have the perfect opportunity to become the dominant player.