A lot of expecting mothers have asked themselves, “Can a drug test detect pregnancy?”. This is often a fear when applying for a new job. But fret not because a screening appropriately conducted will very rarely return as positive because of pregnancy. 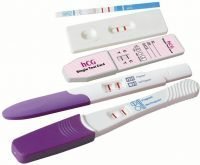 These fears have been worsened by tales of men who attempted to use their wives’ urine to pass a screening. Only to have the lab results tell them that they are pregnant. In reality, this would never happen unless the man was given a pregnancy check in addition to a substance screen.

It’s important to know that you must consent to a pregnancy test. Therefore, if you are given a drug screen, and the company also runs a pregnancy screening without your consent, then it may be considered an invasion of privacy. Though, in some cases, such as receiving a physical at the hospital, you should expect a pregnancy test to occur as well.

Furthermore, if you are given a pregnancy check when applying for a job and are denied the job because of its results, then you should immediately seek legal advice. Federal law prohibits companies from discriminating against women because they are pregnant.

Can Pregnancy Cause A False Positive?

A drug test is not designed to detect pregnancy, but there have been a few cases where the pregnancy resulted in a false positive. In these cases, it was often opiates or methamphetamine that was detected by the screening. These cases are extremely rare, and it is still not entirely known what causes them to happen.

It is believed that these false positives are somehow tied to the hormonal changes that occur in pregnant women. If you are pregnant and taking a drug screen, it is a good idea to inform the company handling the screening so that they know this may be a possibility. If the screen does return with a false positive, then you may be able to request a second test.

Unfortunately, in a worst case scenario, an employer may deny a re-take and employment based on the false positive. These cases are extremely rare, and most employers should be willing to work with you if you explain the situation.