The question of “Can you vape kief?” has probably come up among those who are familiar with marijuana. Some marijuana users have never even heard of it, and they could be using it to their advantage. To honestly know if it can be vaped, one must understand what it is and how it is obtained.

Kief is a byproduct produced from marijuana that belongs to the family of concentrate or hash products. It is pretty easy for most people to obtain if they can already get marijuana, which makes it a good product for smoking. The key to getting it is by looking at the surface of the cannabis plant.

Cannabis leaves and flowers have tiny parts on them called trichomes that are all over the surface. The highest amount of THC is found in these trichomes, and when marijuana is being ground in a regular grinder, the trichomes will break off the parts of the cannabis plant. The mill will have a filtration screen, and the kief will fall to the lowest part of the grinder. 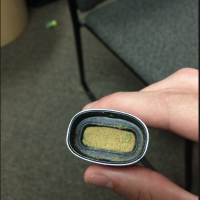 To get a closer to a pure grade than a standard grinder than can usually produce, a kief box can be used. These boxes have multiple micro screens that will filter out the unwanted parts of the mixture when grinding occurs. The chances of getting a 99% to sift on the first try are unlikely, but with a little bit of time and filtering, the batch will become purer.

Kief can be vaped, but there is a bit of a caveat with it, as the 99% sift variety is the best option when putting it into vape pens. Any grade lower than this will come with the risk of leaving clogs in the vaporizer and having a bad taste. There is the option of turning it into an e-liquid when mixed with vegetable glycerine and vegetable glycerine and heated in a saucepan on top of a pot filled with water using something similar to a double boiler technique.

Marijuana users can put all of that kief that they’ve probably been throwing away to good use. All they have to do is get the purest grade to get the best results.