WATSON 3202 is an oval shaped pill. It contains 325mg of Acetaminophen and 5mg of Hydrocodone Bitartrate. Watson Pharmaceuticals manufacture it.

Its unique appearance can identify the pill. The imprint on one side of the pill reads WATSON, and the other side is imprinted with the number 3202. There are several pink speckles visible on all sides of the oval-shaped hard tablet.

Some of the most common ailments the drug is prescribed for include rheumatoid arthritis, chronic pain, back pain, and cough. It belongs to the drug class narcotic analgesic combinations and risk during pregnancy cannot be ruled out.

The combination medication is only available with a prescription. Under the Controlled Substance Act, it falls into the Schedule 2 controlled substance classification. That means it has a high potential for abuse. 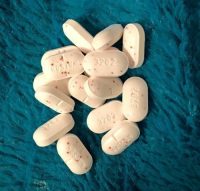 Narcotic analgesic combinations should only be used for short-term periods to reduce the chances of dependence. They may not be suitable for those who suffer from pre-existing respiratory problems or seizure disorders. They are also not recommended for those with gastrointestinal obstruction or people who have recently used monoamine oxidase inhibitors.

The most common side effects include constipation, nausea, dizziness, and drowsiness. Long-term use of the drug can impact on fertility in both sexes. It is not known if the effects of the opioid on pregnancy can be reversed.

After ingestion, peak concentrations in the blood of the active ingredients are typically reached with an hour and a half. The drug’s effects last between four and six hours. After that time a second dose will need to be taken in line with directions provided by a medical professional.

WATSON 3202 is FDA-approved for use in children. But, due to its highly addictive properties, it is only prescribed when other alternatives have failed. It is possible to buy generic Acetaminophen and Hydrocodone Bitartrate 325 mg / 5 mg pills.